Directions change and more of the same. . .

Posted by Tinia on January 12, 2012
On Tuesday morning we said goodbye to our darlin'
Jersey, Stella. This makes one of the first huge
changes we've made since this farming thing began
in 2008 due to lack of proper planning, and it was a rough one.

We purchased Stella without thinking things through,
assuming we knew more than we really did
and waited 2.5 years to wake up and realize
a Jersey cow didn't belong on 23 acres of
hillside in West Virginia.

So our darlin' Stella has made her way
to a vastly larger farm in Milton, WV
~ Twin Maples and Simply LLamas Farm ~

Stella will join other Jerseys and be part
of a program breeding Miniature Jerseys.

We will be bringing in a lovely little Red Dexter heifer much
more suited from Twin Maples to our little hillside farm.

Our Anya went off to the same farm to be bred since it
appears since her purchase that her previous breeding did not
take, and she will come back in a few months, hopefully,
to calve in the fall with what will be our fist calf born here!

Speaking of cows, doing countless horse rescue might have a perk,
though I use the word might since I don't know the whole story
yet, but I received a call from an animal control officer
regarding a cow/calf pair wandering in a local county,
and we've been asked to take them.

This might just cover a portion of the winter hay feeding costs IF -
BIG IF - the cow is in reasonably fair shape and we can catch the pair
tomorrow. Keep that event in your "add on" prayers tonight!

Those that have followed the blog or Facebook farm page since last winter might
remember what an awful kidding year we had due to kids being overly large.

I don't expect such a disaster this year, but we did start kidding our
with a premature birth that resulted in a stillborn doeling and very weak buckling.

Thankfully, we brought him in and have him doing very well now on the bottle.
He was due on Christmas eve, was born a week early and we dubbed him
Rudy! His dam, Avalon, is a first freshening Nigerian Dwarf, and she is producing
very well for a FF Nigi, giving 1.5 quarts a day.

Her udder is well attached, teats are a good size, albeit the placement could be better
and I'm happy all around with how she has turned out!

On another note, I've mentioned before, but we have two
Great Pyrenees that I adore, but they are poor livestock guards.

Carly and Kyla have actually sat and watched Fox run off with
chickens and let stray dogs come right up to the house without a
as much as a yip. Yesterday, a friend and dog rescuer called
about a beautiful, kind Male Pyr in a high kill shelter a few counties
over, and I believe we might bring him in and see what kind of job
he does. If he doesn't work out, we'll at least place him well and see
him safe. 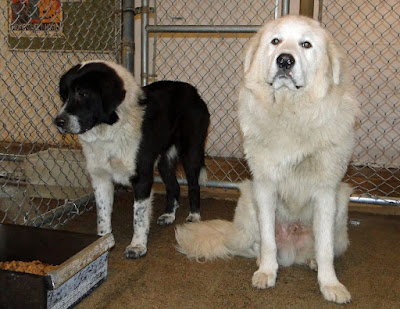 Until next time. . . folks, stay warm out there