What I have little knowledge on is growing plants.

I purchased them at Wal-mart as organic seeds and
hoped, prayed. . . 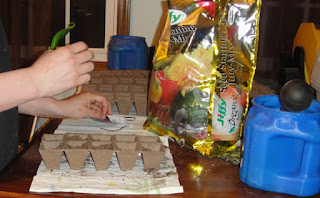 I failed at growing a darn thing from a seed,
and I purchased my started plants
a bit late in the spring from Southern States.

While they did grow,

There was not nearly as much satisfaction from the harvest
as there would have been if the plants had come from seeds
we nourished and watched grow, I am sure!

This year, we made some changes, though we
still did start a bit late in the year and have a huge amount
to figure out. . .

My friend, Stephanie, at Pauley's Rowdy Acres
planted both Organic seeds and then seeds that were
from Baker Creek Heirloom Non-GMO seeds,
and the latter has grown far, far better!

We also created, from a Grit Magazine article,
a neat and inexpensive light set up for starting seeds.
I would say the cost is under $50

They have been planted only 4 days, and the seeds are already sprouting!

We didn't get that far before!