The water came from a whiskey barrel 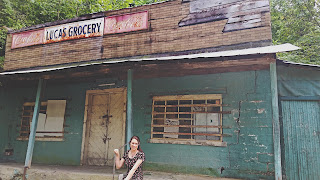 The water came from a whiskey barrel
Water is a little more important to me than the average child of the USA born in the 80's.
Why I appreciate safe and consistent water access at age 33 as deeply as I do despite growing up in the time of the greatest conveniences known in history is a bit of a story, as you might have guessed it would prove to be.
Daddy was a man born in poor Appalachia in 1923. He grew up in a cabin with two rooms and a dirt floor. He was one of ten or twelve children. He is gone now, as all but one of them are, so to be honest, I cannot tell you right off exactly how many brothers and sisters he had or even quite where he fell in the birth order beyond near the middle maybe?
It was not uncommon for children of the day to contract and die of what we know today to be dysentery. It was known by Daddy as "The Bloody Flux." He was nearly lost as little boy to the infection. I remember so well how he would speak, always distantly and with such sadness, about the day his mother lost two of her very young children to the illness, which comes from poor sanitation most of the time. I remember hearing the term "Bloody Flux" and wondering what an awful and helpless a death this must have been. It Seems like one of the babies was named Charlie, and I believe another was called Coony. It has been too long since I heard the stories from my Daddy to tell you with certainty, though.
He did not care much for modern things. So I was born and brought home to a dwelling that had neither a well, cistern or public water.
Daddy had a whiskey barrel on the mountain that worked with gravity, and through the pipe he ran down the mountain, we would get water in the kitchen and bath. It would freeze in the winter as much of the pipe was exposed, it would run dry in the summer. . .when the barrel was new, the water would smell like Moonshine, though I had no idea what made it all smell so funny 30 years ago.
When it did run, it dribbled, when it didn't run at all, Daddy collected rain water and kept it in jugs outside the front door, and we went to the outhouse.
Oddly, we were not poor, he was the fellow who carried around enough to buy a new car in his pocket and never used credit, but it never seemed an important thing to him to have a modern water supply at this place. . .even through the time of his death in 2009.
I was about 6 years old when I moved away from our little trailer and whiskey water, and how quick I was to learn to appreciate good water pressure, somewhat consistent water. . .
Even when we moved. . .that water was from a well. Our wells were always full of Iron and smelled like rotten eggs whenever we moved. They turned brown hair brassy and blonde hair orange. It turned our white clothes yellow and our bath tub a deep rust, but man, it was almost always there, at least. . .
Well, sometimes the pump would go out -
Who am I kidding. . .IT went out a lot. . .but it was a step in the right direction. You learned to not buy whites. Black socks and blue towels it was!
One day, city water came through. I was about 14.
When I would go to my Daddy's store, back to where I first began, I would see the tens of gallons of water he carried in, though in his 70's then 80's, heating it in a huge pot on the gas stove, the same stove where, in the oven, he hatched Bantam chicks, turkeys and geese. He would carry it back to bathe in semi warm water in the winter. . .
In 2000, 2003, 2005, 2007. . .he caught it in rain barrels when he became too old to work on barrel and line coming from the mountain. . .
And it makes me wonder if one of those old wooden barrels is still up there. . . in pieces and helps me remember how very hard he worked to keep water coming to us all that time. . . in the way he knew best to do. . .
These days, I would say I had water without even giving it a thought, but I suspect after reading this you know I never have water without giving it. . .a second thought.