Posted by Tinia on March 23, 2014
When dairy goes wrong
I was emailing with a goat friend of mine, Jim, once 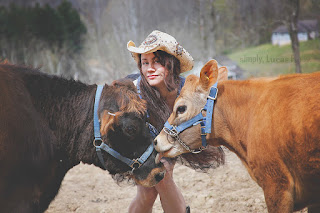 He mentioned how he mostly discourages people from getting into dairy goats (even as a seller) because so few really understand the commitment, cost and what a labor intensive endeavor it is, thus the kids or goats sold to such people suffer and end up with questionable care and eventually sold in an ad somewhere or at auction or diebefore making it that long.
He is right.
I do the same. Heck, I teach Intro to Dairy classes which could be called "Why to Never Endeavor into Dairy."
Many friends who first asked me about dairy goats can tell you. . .I've try to dissuade first, to make the undertaking seem impossible.
Once I know you're committed to farming and hands on commitment, it is another matter. Then it works quite the opposite. I will always be on the look our for a cow or goat for you, even when you have enough.
Anyway, I do the same with dairy cows as I do with goats.
Seriously, you have to milk a real production cow - period.
end of story.
You can get away with leaving kids on a dairy goat and not milking. . .You CAN'T do that with most any dairy cows. YOU HAVE TO MILK that cow.
Have a stomach virus? Still have to milk
Have a kid in the Er? Still have to milk
Break your arm? Still have to milk.
I want to KNOW that the person I'm talking to understands this is 24/7, in the snow, in the rain. I want them to know it is expensive, you have losses and many people hate it. Most hate it once they begin.
A few are crazy. They love it. It is bizarre.
You're buying a living, hard working being. You're trying them out, and if you do not like the experience, you're not likely to care how you take care of them or where they go when you're finished owning them.
That is a tough one for me.
I heard one goat breeder say few of the kids they sell each year ever make it past that year.
What!? But then I hear that happens a lot.
Lord, how sad.
I know many goat breeders who actually will not sell kids anymore. If kids aren't kept, even nice doe kids, by the farmer, they are grown out through human care and processed, never offered for sale.
I've sold to a few unethical folks masquerading as well grounded, solid and kind people, but right off the top of my head, the majority of the kids I've sold I know made it to adulthood, and I know where the VAST majority are right now and still know how they do. . .and some are many states away.
Finding truly dedicated dairy homes is so tough. Finding people not looking at farming and especially dairy animals through rose colored glasses is an uphill battle.
Statistically, Jim says the majority are out of goats (I assume this applies to cows or even sooner with dairy cows) in under 3 years. Where do all of those does, bucks and kids go? Some grounded goat people see a good deal and snatch them up sometimes.
But most some run through auctions, get tied to cinder blocks as brush control in a backyard, die from worm overloads, coccidia or go to more random people from a CraigsList ad that will repeat that same process again.
That is not fair to animals that were bred for a purpose and can fill that purpose in the right hands.
Thankfully, I know a lot of dairy breeders, like me, that simply will not sell to such people if we have any idea the end may be like that.
I can tell you I respond to less than 1/2 of the inquiries I receive looking to buy dairy animals.
As a homesteader / farmer, if you are already well on the path of dairy cows or goats, be really candid with potential buyers.
Explain the cost, the downsides. . .really get a feel that these people are sincere and up for it. Ask what will happen if the animals don't work out, what do they plan to do, where do they go? Ask about their expectations and long term goals.
We should care where the offspring we offer end up, and we should care to be honest with buyers who might turn and walk away if they knew how farmstead dairy really can be.
Our concern for the offspring from our land should not be cut off once the kid or calf leaves our farm. Lord knows, it does NOT stop for me at that point.