but I felt it was time for a new overview:

What? I know. I do not do short and to the point well.

I own both a herd of dairy goats and a dairy cow.

I like both, but they are quite different in most every possible way except they
both give milk. Cats also give milk. . .but they aren't in the running here.

You may think giving milk alone makes them remarkably similar.

So you first need to decide what you are looking for:

Yea. They can be. At least if you chose the right cow and are positive sure you want a dairy animal
and can make the commitment.

They need a few hoof trims in a lifetime. They have a slightly longer productive life.
If you chose the RIGHT genetics, they produce on grass/hay only. They
are much easier, with the right management, to raise organically than goats. They need far less
worming, respond better when wormed and have far fewer health issues in
general compared to goats. They are content as the only bovine, though companionship
is desirable, they do thrive well as the only cow. They are usually easy to contain.
If you chose a miniature breed like a Miniature Jersey or Milking Dexter or
a Mini breed crossed with a dual purpose short horn or reg. size Jersey,
you have a fairly easy to manage sized animal. You have one offspring yearly, usually, and you
have a better market for bull calves than buck kids. A single well bred heifer
calf from a Miniature cow is worth more than 4-6 nicely bred doe kids.
Cows easily give you butter without a cream separator. THAT alone wins them a million bonus points.

So I've built up the Cow side, eh?

The down sides? Miniature cows and cows with grass only genetics
aren't easy to find or are very expensive. The initial investment in a cow
is 2-6 times HIGHER than a nice dairy goat. Most families will chose a Jersey
cow and many jerseys give 6 plus gallon of milk a day. Can you use it all or sell it?
If you can, this is a pro, but in many cases, this ends up a huge con. Most dairy cows need rebred yearly and will not do extended lactations well.
Those without grass fed genetics, they need a medium to a large amount of grain (5-20 lbs of grain a day).
They also eat a tremendous amount of hay and drink far more water than a small herd of goats.
They impact the land in a far more negative way, even when a mini breed. They
do not control brush or briers. Cows are finicky. They choose the people they like,
and you may find the cow you purchase hates you -that is  tough. Now you have her and
must milk her. Most dairy cows MUST be milked, like it or not, twice a day even with a
calf on her side. If you decide to hand milk, for a average producer, you may be milking
30 minutes or more each session. You will end up wanting a machine. That is another
$1,000 investment. It is another learning curve, and there are pans to clean and lug around.
Milking is a mess sometimes. They kick and can break an arm. They sometimes Pee and poop while you're milking, and dumping out the hard earned milk sucks. My current cows doesn't do this.
My previous cow did. Most do.
When they get down and sick, you have seriously large problem, though.

Did I mention if they don't want to, you can't make them?


Goats get a turn to defend themselves! 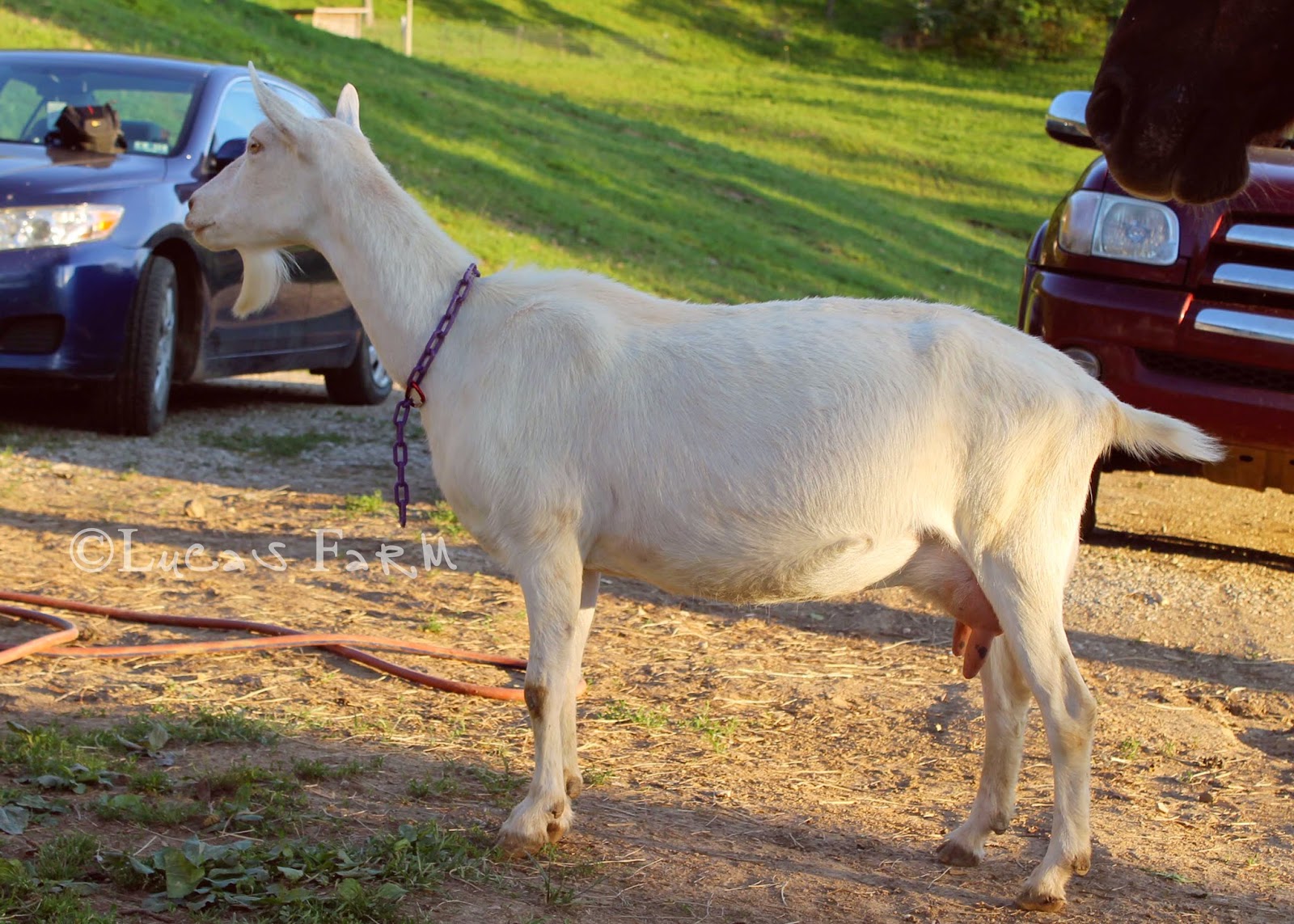 I love goats. Have I told you that? I'm known far and wide
as the Go to Goat Girl.

Goats are charming, funny and loving. That may not seem to factor in on a farm
decision, but it does. They love people when raised right. They kiss you and snuggle
with you and follow you around screaming, "MAAAAAA!" When you're tired and sad, this means a lot.
They are like chips. You can't have just one and the more you have, the happier you feel. This is no
Joke. They are easy to handle when tame and disbudded. They happily jump on a milk stand
and after a time, are generally perfect to milk. No incidents. They never pee or poop while being milked.
It is much easier to get clean milk whether you hand or machine milk with goats. They eat the brush and weeds and thorny things you do not want growing on your land and save you the job of fighting it. Goat cheese is divine. Their milk makes the best cheese and generally is universally well tolerated. Hauling a doe to be bred is much easier than hauling a cow if AI isn't an option. Disbudding, Tattooing and vaccines are typically easier because you're talking about 150lb animal instead of a 1,000 lb animal. They are easy on the land. If you have steep, rocky land, they do not cause the erosion a cow will, even a herd is easier on the land than one large dairy cow. Goat poop is EASY to deal with!!!! Hand milking is fast and easy with most does. I can milk nearly a gallon out of one doe in 3 minutes. It takes me 10 minutes to milk a bit more than that from the cow. Most people prefer to hand milk goats unless they have a large herd of over 8 in milk. They can be kept on very small acreage with the right management. The right bloodlines can do extended 2-3 year lactations without rebreeding.

Did I mention they are whimsical to the extreme and watching the babies play makes my heart sing?

Goats have a steep learning curve. They have a plethora of illnesses, many related to mismanagement, that follow them. They are very difficult to raise organically. They have difficulty with parasites and typically require hard core chemical worming and religious upkeep if one attempts to avoid much use of chemical wormers. There is a high rate of parasite resistance in goats. . .so you may have to resort to multiple wormings to get the parasites under control. The goat kids typically need a prevention program to avoid Coccidiosis. They have high copper and selenium needs, and they usually have to have copper boluses and BO-SE twice a year depending on where you live in the USA. They require a fully stocked goat medicine cabinet. They will require a high quality grain when in milk and usually alfalfa hay or access to unlimited high quality forage when turned out plus grass hay. They require frequent hoof trimming - some monthly, some quarterly, but it is, at any rate, far, far more than cattle. Containing goats can sometimes feel like keeping water behind a fence. Forget having lovely flowers, berries bushes and trees - if they get out - those are the first things they destroy. If you need more than a gallon a day, you will need 2-4 does in milk. Does will give, in general,  4-12 pounds of milk depending on age, breed, quality of care and bloodlines. They cannot be kept alone. Kidding issues are more common than calving issues, though management plays a big role here. . .when a beginner, you're liked to do a lot wrong - goats are not very forgiving of mistakes. Goat's milk is fragile and picks up odd flavors if even slightly mishandled easily. Goat's milk will also taste off when the goat has a heavy worm load or mineral imbalance and that can happen often in folks that aren't experienced or trying to raise organically.

Overall, there is no one size fits all dairy animal

Once you choose a cow or goat, you then have to tackle breed choice,
and that is another blog on its own!

Be like me, I guess, start with one. . .add the other, and your barn yard can look like this menagerie