Posted by Tinia on January 06, 2015
This is a photo of my grandmother, Lucy Fry, with two of her children when she was quite young, around 1905 or so, as a guess.
Her entire life was worked out in the Appalachian's mountains around Ranger, West Virginia.
Born in the late 1880s, she died in 1961, two decades before I came about in my dad's old age.
I cannot even tell you if the children pictured are two who survived childhood, as a few she bore did not.
My aunt, now in her late 80's, tells me how like her my Daddy was. . .very Serious, pious, rejecting all that one could ever call foolish, working always and enjoying very little. And she has told me how My Daddy seemed to love her more than all of the rest, so like her was he.
When she looked at this photo with me, she comment, "Look how sad Mommy looks here. Well, though, really. . .see, she was sad."
She toiled as a washer woman when her husband was murdered and severed on the rail road track that cut through the county hauling coal out in the 1920's in the backwoods of Lincoln county (truly the whole county is backwoods, to be honest, then and now). The reasons for his death have changed over the years. Surely, I do not have the answers. Never will.
This portrait shows the solemness of the real life of a homesteader in Appalachia which was lived out in a two story, two room cabin with a dirt floor with one of the rooms upstairs being where everyone slept together to stay warm. Where shoes were tied together when the soles fell off and not everyone received a pair.
Lucy gave birth to 11 or 12 children, I believe. Two died of Dysentery, called the Bloody Flux in those times, on the same day. Seems like others died before, but none after that. My father was nearly lost in the same moment. She buried them and went on. What else was there to do? She never really spoke of them again, he said. Had no time to mourn. He supposed that the pain would have been too great or possibly she was numb from that life and all of the loss.
My Daddy told me many times about How she left each day to go wash clothing in the creeks for local people, and he would sit on the hillside by the homestead and cry for her, refusing to go to school.
He told me how she did not name the children, but gave them nicknames like Tiny, Peep and Sis. . .leaving the choosing of names to them when they grew older. . .
and How an elderly Black man passed through when my daddy was only 5 years old in the nineteen twenties, and she took him in to feed him. She cautioned him to be careful because "colored folk" rarely made it out of that county alive during those times. He played the fiddle for the family and went on his way. Daddy often wondered if he made it out of the county alive. So struck was my father as a little boy by this experience, he chose his formal name after the black man who played the fiddle for them that day. . .Donald Davis ("Tiny" Donald Davis Lucas)
I realize when I look back at photos such as these, when I try to recall these stories, that when we think and talk of homesteading, many of us do not know what we speak of at all. How the joy we find during the journey to reconnect would seem silly to these tough and seasoned folks. . .
But I am pretty sure, at least my Daddy would understand. 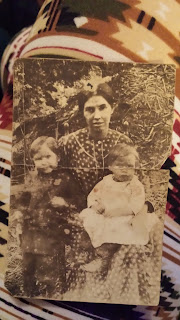