I'm going to tell you a terrible story: One of an Idiot and Dairy Goats

One of an Idiot and Dairy Goats.

I have considered sharing this many times over the years. It is embarrassing, frankly. The stupidity of it cannot be overstated, and that is a fact.

I've thought about sharing these photos, though I've told the story now and again, each time, I decided against using the photos.

No one wants to flaunt their mistakes. right?

Instead, I've just continued to explain the need for proper management, but I realize pictures are worth thousands of words.

Every kidding season, I continue to hear too much of this: 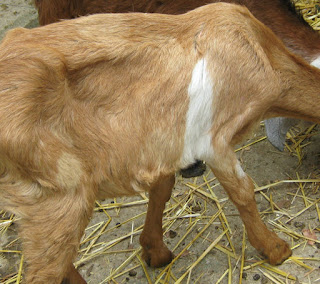 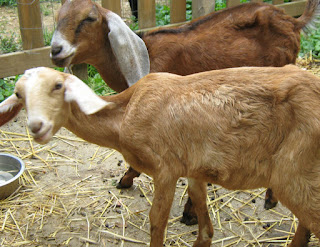 The first dairy goat kids I purchased 6 years ago were bottle kids, along with a dry yearling doe.

The 10 week old Buck and Doe kids were very healthy at purchase. The breeder had a lovely herd, but no one thought it imperative to make sure I knew what I was doing with these little ones. Not even me.

I did not use wisdom prior to the purchase and research common issues with goats, and I assumed as long as I have enough nourishment and shelter for them, like many creatures, they would grow and thrive.

How wrong I was.

The photos you see above are of Candy and Bo.

Most of the Facebook page followers know Candy all too well. The sleek, plump doe with the socked on udder and sheen that will blind you.

Well, take a good look above, for the emaciated cream creature above shows two goat kids I owned, and the one is the Candy we all know so well at about 14 weeks old.

This is not how they came to me a few weeks prior.

The look you see there isn't from lack of food, living in unclean areas or a parasite burden already on the land.

This was before we had a herd of Dairy goats. This was land no livestock had ever been on.
This was a situation where feeding pans and water was very clean, and yet. . .

Though I didn't know it then, they were quickly and viciously being killed by coccidia, a parasite that you can almost not avoid if you raise goat kids. (Coccidia is not worms)

A parasite the uneducated find stall the growth of their kids, damage their intestinal tracts
before they mature or kill them each year. Too many people never realize what is happening or how to prevent it.

Coccidia can destroy and kill so fast, while you think your lack of prevention or holistic stabs in the dark are working, you could find out too late you are very wrong, the end result an be dead or damaged kids.

Do not negative coccidia fecals fool you - many times your animal has heavy coccidia that do not show on fecals because of the shedding cycle.

Candy and Bo went from lovely conditioned goats to the above state in no time flat. 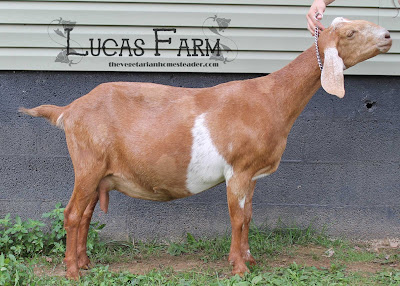 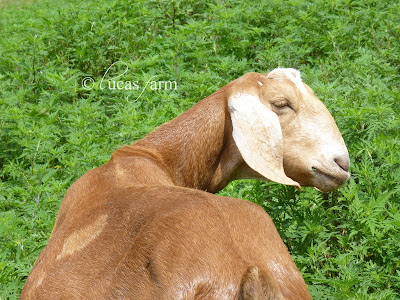 These photos are Candy now. . .5 and 6 years later

No worse for the hard wear, as difficult as it is to believe.

But most would not have recovered like this given how bad she was at the onset of treatment. It should have been too late. Most would at least have residual effects where they are rendered un-thrifty, have low parasite resistance and so forth. As for Bo, he recovered, as well, because once I learned what I had allowed to happen with poor management (the type of management too many new goat owners attempt), I corrected the mistake that very day. I started them on coccidia treatment (Dimethox), probiotics, feeding more milk and medicated pelleted feed. Before I knew it, literally overnight, the condition started to improve.

Candy has proven to be hardy after recovery in all ways. That told me several years into raising goats that we weren't dealing with a goat with no ability to fight off the parasite on her own. . .we are dealing with a parasite that Production animals that do not exist in the wild at all which are not suited to these hot, humid and wet climates NEED management that helps protect them to what they do not have natural resistance to (and never will from the looks of things).

I have never again had a kid have condition loss from Coccidia. I have never operated without a management plan knowing that we will always deal with Coccidia in this area since that time, and I know of a handful of kids somehow managed  to make it and grown well without prevention or treatment, that is random luck that we cannot be sure to recreate with most kids.

The Thing I always stress during clinics I teach on goats. . .

People talk about Natural care, but you are taking an un-natural animal: A Dairy Goat that could never have existed without decades and decades of man-controlled selective breeding, asking for highly unnatural milk production for an excessive length of time. . .all the while placing them in a very unnatural environment (in terms of limited space even if you have 100 acres, weather and geography). . .and say: I want to raise them Naturally.

How in the world can we ask this of these animals?

What you should attempt is create a system where intervention is as low as possible without ever sacrificing a lovely condition of the goat herd. If you have animals that take too much management, then do not pursue using them in a breeding / farm program, but no management and low management are two different things. It is the difference in feral living and farming, really.

Now I've shared my terrible mistake with you. You know better starting out than I did, and so you
will hopefully not make these same blunders (the term blunder is really too kind).

And thanks to the journey, all of Candy's kids over the years have grown, without hindrance: 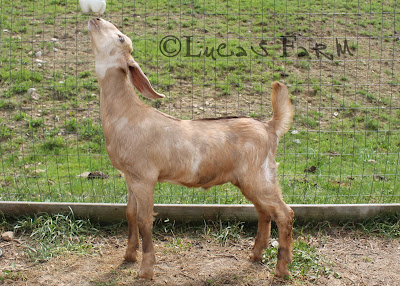