It rests on you, Clemmy.

Posted by Tinia on October 15, 2015
The Chronicle of the Cows
I'm headed this morning to The Cupp Family Farm with T. Cupp Miniatures
From the start, almost 7 years ago, I wanted a dairy cow.
If you can believe it, and likely you cannot, I wanted the cow instead of goats. The farming fellow read some deal about the amazing qualities of goats for the self reliant, and he was sold.
Years later, he has moved on, and my love affair with caprines is going strong.
We had no idea what we were about. Any cow seemed a good choice. Note to self, this is not actually truth. We thought it was, and dove full on.
We purchased a 10 week old Jersey heifer from a monastery in PA. Stella. . . bred for commercial level milk production. She was a big girl as she grew. Bigger than most Jerseys, at about 52'' at the hip. She was a love bug. She tried to mount everything all of the time, including my Kia Sedona, which still carried the dent in the front from her affections, when I traded it in. Me when my back was turned. She was more cow than I knew what to do with on this little place, and while I loved her, I eventually saw, after almost 3 years, she'd be better off on a bigger farm, and our farm friends at Twin Maples became her new owners. She gives 10 gallons of milk a day, I hear (and they have a 50% Mini Heifer out of her for sale nOW).
Next Came Elsie. I had followed her adventures for a few years on a farm page in VA. I had co-purchased a bull calf from her with a friend a year earlier. When she came up for sale, I jumped at the chance to bring her here as she was a mid-sized mini. Much smaller than Stella, not as huge a producer. She was a grumpy cow who cared nothing for people, but she did her job by and large. She liked my farming fellow especially well. She gave us a lovely heifer calf and 6 gallons of milk daily while eating a ton of grain to keep nice condition. We lost her quite suddenly to bloat. We were shocked. We still talk about her (always will) when we go up the hill, reaching the top and remember what a pretty, pretty (and snarky) girl she was standing there by the hay bale like clockwork.
Now we have Ellie. Fat Ol Mini Jersey Ellie. The perfect cow in many ways. Smaller than the previous two, she is grass fed only. Milks 3 gallons at peak on grass, stands like a dream untied to handmilk. She is hardy and easy to care for. She also hates people, but apparently, that is a given with a cow I'm milking. Trouble is, after the last lactation, she hasn't settled. I love this wicked cow. She stays. I tried to talk myself into an alternative. I failed. We just did a CIDR and GnRh. We will try AI and then Live cover. I'm hopeful because she has had 4 calves prior. And she is exactly what I hoped for all these years in a family cow, with the exception she isn't a lover of people. She stays, whatever comes, I think.
Cows are lonely without another Bovine around. I'm lonely without real butter around. I had purchased a companion cow for Ellie, but the owner of the little Dexter really hated he had sold her and recently purchased her back.
In Comes Clemmy. A 75% Miniature Jersey heifer from a farm we've loved for years: T Cupp's Family Farm. She arrives tomorrow. The future family cow for Lucas Farm. If Ellie takes, that is great, as Clemmy is young and will not be bred for quite a while, but looking to the future. . .and our love of Butter. . .
There will be Clemmy. We will see if she breaks the wild and sassy cow curse.
Who thinks that is likely?
I've heard cows act like their owners.
It rests on you, Clemmy. 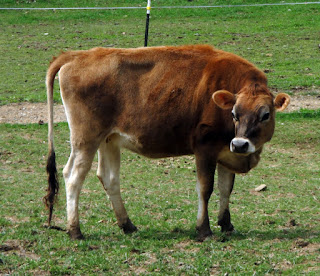 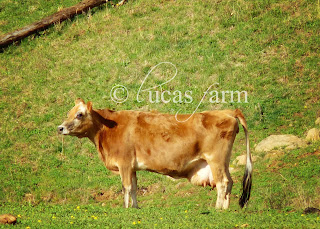 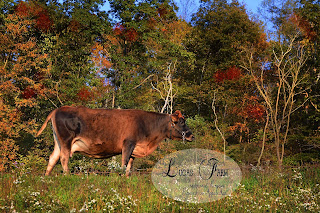 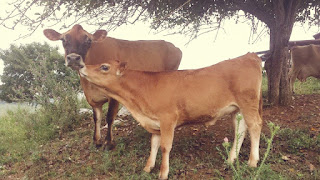