The centuries old way to keep your livestock safe: LGDs

The centuries old way to keep your livestock safe.

For thousands of years, herdsman and farmers have used "White Livestock guard dogs" through out Asia and Europe.

Popular since the 1970's in America, once they caught on, any homesteader or farmer will tell you, they solidified their place with us quickly.

The top breeds used on large working farms with real predatory threats based on survey are:

These breeds are effective against stray dogs, black bears, cougars and coyotes. Their size, usually being under 120 lbs,  and disposition make them ineffective against very large predators like wolves and Grizzly.

(I'll be the first to tell you I've found all sorts of dogs willing, by chance, to guard sometimes, but there is a reason these breeds are used by the major ranchers in the USA, and that is because they are what works when push comes to shove and you depend on the animals to survive to feed your family)

Nearly 1,000 dogs were reported on this study from the 80's.  Mixed breeds make up less than 5% of LGDs. Two other breeds mentioned are the Shar and Kuvas, and the Maremma may not have enough numbers in the study to show a good portrait of this breed.

Livestock Guard dogs work by instinct. You have to expose them, but with very little effort, they generally will work unless you are working with a cross or an aged animal that has never encountered livestock. Also, you always have an aberration within anything.

In the studies I've read, one compares the effectiveness of have an LGD to having no protector with the herd.  126 Colorando ranchers/farmers reported nearly $1,000,000 less in economic Losses between using Livestock Guard dogs or not in ONE year. Those surveyed reported being strongly happy with the work of their dogs.

Ranchers and Farmers report 93% fewer lives lost, as a whole, with the use of Livestock Guard dogs, and when compared to donkeys and llamas, dogs prove more effective guards and are used far more widely, as a result.

Great Pyrenees are the most common by a significant number. They are, as a result, likely to have less consideration given to breeding quality because they are so common and so many folks breed them, but that said:

I've owned 3 different Pyrs from different walks of rescue life, from age 6 months to 6 years when they arrived here. They all were non-aggressive with friendly dogs and friendly with people. They are child safe, and they are roaming. They guard mostly by bark and presence verses attacking. They were effective overall.

Pyrs are the least aggressive of all LGD breeds. They roam more and stick with the animal less. They are far and away the least apt to harm/kill the flock of sheep or goat herd (poultry isn't listed in any study, and many friends report their LGDs kill poultry no matter their age. Mine never have, but remember, their history is NOT with poultry - they are guards of cattle, sheep and goats historically). They are the least apt to bite people. They are ranked as the lowest in liability, by far, though they stay with the flock less than many others, as they guard by roaming and patroling. They are ranked as very aggressive to predators, with the exception of other dogs. They are far less aggressive than the other breeds with other dogs, which is benefit if you have other farm or inside dogs. A downfall is if your need of a guard comes from a friendly neighborhood dog who likes to come kill your goats.

The details of the Komondor, Akbash, Anatolian and
Maremma are in the chart attached.

In closing. . .if you are dealing with Grizzly and Wolves, these breeds above aren't effective.

Great Pyrenees, Komondor, Akbash and other more common breeds “are no match for these larger predators.” Farms and Ranches dealing with these predators are importing much larger, more assertive dogs like Kangal, Karakachan, and Cão de Gado Transmontano at great expense. They are more "bold," more expensive and much larger (150lbs).  These dogs do prove effective according to the USDA and farmer reports.

1988 Journal of Range Management, Sheep & Goat Research Journal, Volume 19, 2004 and my own experience as a farmer and rescuer 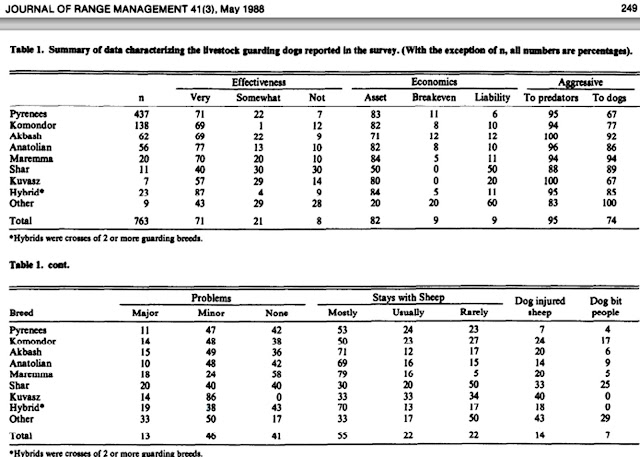 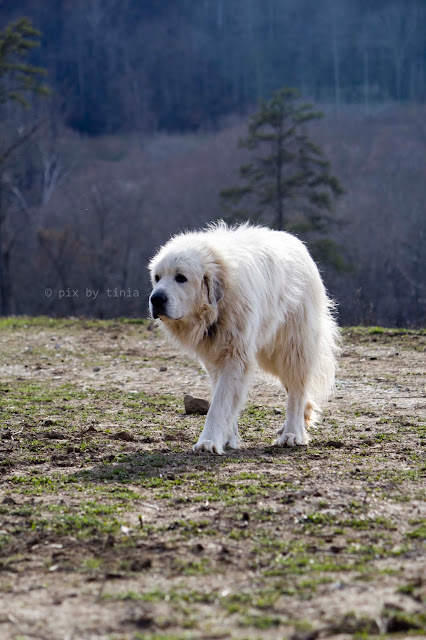