Posted by Tinia on October 22, 2015
When I moved to my small farm in 2009, I had a rude awakening. . .No, I'm not talking about the emotional awakening or the physical one. At this point, I'm talking about the legal type.
I just assumed, with some amount of manageable regulation, I could sell my goat's milk . ..as people wanted it. Real. Raw. If not directly to people, then for crafts, to bottle raise animals and so forth. If not as milk, then as aged cheese. . .without being a Grade A dairy.
I found out quickly, that was not true. I found out nothing was being done or had been done to push to legalize raw milk in any form in West Virginia.
I really couldn't believe people could not decide whether to "cook" their milk or not. They decide how and if to cook all other much riskier foods.
Why not milk?
Raw milk sales for any reason were illegal. Sales of homestead aged cheese were illegal unless you were a grade A dairy. Herdshares and co-owners was illegal. Everything was illegal in the Mountaineers are always Free state of West Virginia when it came to milk. . . .unless it played into the Corporate system of dairy. How surprising. . .West Virginia being controlled by corporations and lobbyists, not its people. Except it wasn't surprising, really.
The reasons have never had anything to do with safety. They are solely based on economics. Economics that harm consumers and small farmers.
So I worked to see this changed. It was a passion. It still is. No one seemed very interested, at first, but it caught on, and by the time I wrote the original language for West Virginia's first Raw Milk Sales and Raw Milk Herdshare bills in Winter 2013 to be introduced by Del. Kelli Sobonya, there was a good support base growing.
I've spoken numerous times at the legislature and watched the support there grow, too.
Our really united push saw the WV Herdshare Bill passed by 2015. Granted, the Gov. Vetoed the bill, but what we saw was in a short time, possibly the most restrictive state in the Nation was very close to ignoring corporation and lobbyist money. Not quite, but we are close. Big Dairy Lobby money killed the 2015 bill, it would seem.
I feel very sure 2016 will see the Herdshare Bill passed. It will see farmers given an amazing opportunity. It will see consumers given access to a better and safer food. We aren't likely to see off the farm sales, yet. In time, we will.
If you are interested in being involved in this fight to see raw milk sales and shares in West Virginia, Get on board now. The push started in December 2015 for the '16 Legislative session, but there is no reason you cannot start reminding your reps now!
Our Facebook Groups and Pages:
https://www.facebook.com/groups/wvrawmilk/
https://www.facebook.com/groups/wvherdshares/
https://www.facebook.com/wvrawmilkherdshare
Our websites:
http://www.rawmilkwv.com/
www.lucasfarmwv.com/realmilk.html
Our Blog:
https://wvherdshares.wordpress.com 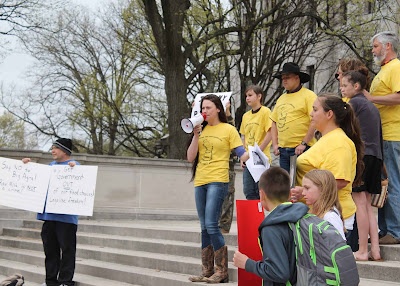