Posted by Tinia on February 24, 2016
No matter what I accomplish, what I have, what I give or do. . .
Nothing would ever top being able to go back for just a little while with him. . .


"You know, Eyes not satisfied with Seeing. Ears Not Satisfied with Hearing."
In his little store. . .full of everything anyone could have been looking for over the period of 50 years,
We sat on his hard, uneven old wooden stool. . .at 85 years old he said he would work still because the Bible said nothing of retirement. . .
When I was only in my mid twenties, and not even close to his youngest child. . .his store closed, and he was gone.
Daddy thought nothing of taping his shoes together, wearing his shirt thread bare and his pants patched without more than a pot bellied stove in the harshest winters and never air conditioning in the summer.
He drove a 1990 Camry that had 260,000 miles on it, and he said it was good enough for anyone.
He thought nothing of routing our water from the mountains through plastic pipe that had pooled in a whiskey barrel behind the trailer for water when I was a child.
He heated water to bathe in on a pot with his 40 year old gas stove because as long as I lived, there had never been a water heater in the place.
Thank God he did thought nothing of doing these things.
These events and so many more allowed me to know from a young age what we find on the outside, the surface has no connection to real value.
And when his body was failing in the end, but he wanted to go out for a drive and to get something to eat, carrying him from my van to his wheelchair into a restaurant was the greatest privilege of my life.
He wanted me to have everything I needed. He would not begrudge me wants within reason.
He allowed us to have things that would sparkle if it suited us. . .
and he would say, 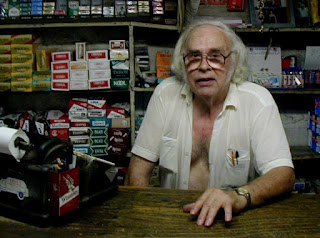