West Virginia Raw Milk, there is no proof milk has made Legislators Sick: the media knows this 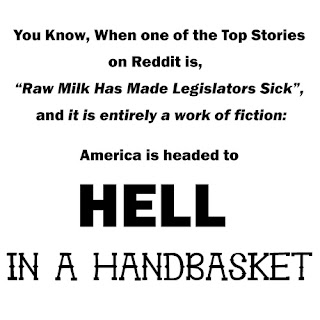 Days ago, long before the media inaccurately reported this tale, I received some information that a member of the House brought raw milk to the Floor to offer to those present to drink. I posted it, too. As it really was, by chance.
It was said suggested by those who had not been supportive of the Raw Milk Herdshare bill on that date that, when some members of the House of Delegates and staff were sick afterward, the illnesses could have been be due to the raw milk given out they chose to drink.The issue was, from the start, many were sick that had not consumed the raw milk on the day it was brought with the same symptoms at the same time.
Norovirus has been confirmed to be making the rounds, and it almost certainly was to blame. Members of the legislature have confirmed this is common at this time of the year, and that before the milk was brought, folks were already beginning to catch the virus. So why, when a known virus with easy to recognize symptoms and common this time of year is circulating to many at the capitol, blame raw milk? Because the government has done one thing right: they have accomplished building tremendous fear and hysteria around real food.
All direct and local sources I’ve spoken to have confirmed this story of raw milk illness to be an unfounded rumor. It is a tale without merit. Further, to date, no medical professional has come forward with evidence to confirm ( this is easy to prove from stool and blood culture/testing) that any illness was connected to food borne illness of any kind, let alone related to contaminated milk. Actually, one delegate’s doctor is reported to have confirmed to that legislator that raw milk was not related. Every single person who has been ill has dispelled the rumor. In a world concerned with honesty, not another word would have been said. Yet, Journalists have avoided the truth in order to sensationalize a story that doesn’t exist. They have opted to not interview those who have been confirmed ill at the Capitol that not only did not drink milk, were never even around milk. American Journalism at its finest. This attempt to damage farmers and local foods is sickening, but it shows what a warped and disconnected society we have become.Too few reading these media reports are bothering to fact check. We, the people, are as much to blame. We have stopped caring about the truth, friends.
Given the radical opposition from the DHHR, Local Health Departments and FDA toward the Herdshare bill, any person who ever becomes ill and has also drank raw milk in their lifetime will find the milk is blamed unjustly. That is largely at the root of the statistics the CDC collects on raw milk, I suspect, as is.
While it has been disheartening to see many folks willing to jump to assume the milk was the culprit during “stomach flu” season in a crowded place of government business, given the decades of propaganda behind this issue, I can only sigh and think, “Of course.”
The Herdshare law does expressly say milk cannot be given out second hand, so it is worth noting, the Herdshare law passing was not involved in the delegate bringing real milk to give out on the House floor. It is not legal in West Virginia for a producer of milk to give it out, sell it or make it available. It is not legal for a Grade A dairy to sell or make raw milk available. It is not directly illegal, from my lay person’s understanding of the rules and law for a non-producer to accept the milk, however, and then give the milk out.
Real Milk, like undercooked eggs, raw oysters, sushi, cantaloupe and lettuce, can become contaminated. Any food, cooked or uncooked, can. There is a low level of risk with food in general; the risk in consuming raw milk is actually less than in some other whole, raw foods. Those seeking out herdshares understand this. It is a personal choice, and many millions of people decide real milk is the right choice for their family, and they use it daily without any concern or issue.
Thankfully, the risk with real milk is minimal, though not non existent, properly handled real foods, including fresh milk, are safe.
Those seeking to damage farmers with this dishonest story do not represent an informed people. Please do not be one of those folks.