I'm pretty thankful for what memories and music and photos give us, if we let them

Posted by Tinia on September 20, 2016
There are a few memories that are simply too powerful and full of meaning to ponder all of the time.
One has to ration them out, as they can. Can for various reasons, mostly because one cannot stand the memories all of the time.
This one.
This is one, but tonight seems a fine time to remember since Youtube continues to suggest this particular song. I can't escape it, so I will tell you all.
Here I am, remembering a song that came to mean so much, but a song that was just another song back then. . .
Remembering her.
She sang. All of the time. With such a voice. I sang with her because she wanted me to. I wanted her to be happy, something that wasn't really her nature.
And to pass the nights at the house when she lived with me so many years ago in Harts, West Virginia, we would record duets. There was nothing else to do. We were surrounded by poverty and drugs and bleak lives. We tried to be different and to find hope and happiness then.
I humored her by singing. I wish I could do so still.
She was so gifted, and yet so shy and fragile and beautiful, and I believed if we performed in the kitchen recording ourselves on my computer enough, eventually. . .she would grown into her amazing "self." She would be sure and loud and fight for a future where she was heard. I hoped she would use that gift to all the potential that was within her. That was never to be, though. 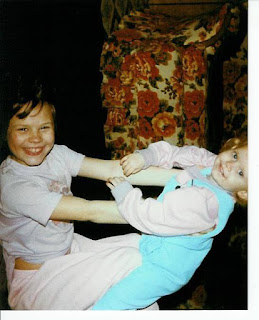 When I heard "For Good" from Wicked, the Musical, back when I did an outdoor theater in 2005, I was sure it was made for us, but I had no idea how much so.
And so we recorded it. I have about 10 versions we performed, with me always trying to get it right, Angel nailing it every single time...
What those recordings of us mean today, almost ten years later, it is impossible to say. They seemed too silly then. We recorded hundreds of songs, but this is and will always be ours.
At any rate, you never realize how much the small thing will mean, the silly things, the things that seem like idle ways to pass time . .until it is quite too late. What seems a silly pass time ended up being played at her funeral. Our song. And today, almost 10 years later, when I hear it, it takes me to the most awesome, heartbroken place. I'm pretty thankful for what memories and music and photos give us, if we let them.