They are the light that I suppose I'll always see at the end of a tunnel I will never walk entirely through.

I've been so bleak sometimes. . . well, let me tell you, touch and go couldn't explain where I've been. May often still be, and yet. . .

Some nights ago, my husband said to me, "You know, you've never been the person I met since. . .that night." I heard some good and bad in those words.

That night my sister. . .so beloved by me she was. . .7 years younger and so beautiful, and my little brothers. . .were gone in a fire and rain and smoke and screams and tears and horror. A few years later, Daddy was gone, too.

I've missed them. I've cried for them. I've begged God for them back. I've stopped and still stop when alone on the roadside because the memories are more than anyone can bear and be "normal."

I've wished to not be here without them, anymore. I've been unable to love others enough because of how much I wanted them. And then, I took apart that old person bit by bit. I've built her back brick by brick.

He didn't tell me I am not the same to be cruel. He didn't say the girl he knew before was better. He did say she was happier. She was. In a superficial way, she was blissful. And selfish. And she knew everything. And sometimes, she cared very little. And she wasn't thankful enough. And she didn't want to give everything she had to make other beings have more, be better, to have a chance.

And maybe I still haven't learned my lesson well enough because I'd be that mediocre creature again in the blink of an eye to see them again. Even for a few hours, but that isn't the way it works.

And since I do have to trudge on, I'm glad I'm better now, if less happy. I am certainly more thankful, and I believe that has more value.

And there are these 3 boys, one not so little anymore and two that still come to snuggle in the morning with me, and if things had to be this way, they are the light that I suppose I've always see at the end of a tunnel I will never walk entirely through. 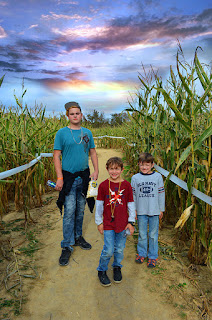