Posted by Tinia on December 26, 2016
My Daddy's Sister, Peep, has been a concrete part of my entire life.
She worked with him for every day of Lucas Grocery's existence, which was over 50 years of toiling on cement without heat or air in a cinder-block building that held a value beyond what money could cover to thousands of people in Lincoln, Logan and far beyond.
She was known for her love a taking photos with the good looking fellows who passed through the store and for an amazing bologna sandwich made for those who knew to ask or took her up on the offer of one, if they were lucky enough to be liked.
She took care of my Daddy when he could no longer get around on his 2 canes, walk anymore and kept the store open day in and out until he died. When he was buried, she locked the doors and so it was over. . .a time in her life which spanned over 1/2 a century.
She is the last of the 12 brothers and sister left, and she is almost 90 years old. She was the youngest, Daddy was the youngest son that lived past infancy.
I suppose I know where my great love for my siblings comes from when I think of her dedication to Daddy. It went so far beyond what most could ever offer. . she is proud of being there for him.
When I stopped to see her on Christmas eve, it was the first time no one was there. She hasn't been well. That is a first, too. She gave her kids all a ham, the gifts early and was just not up to a big to do this year.
My middle son asked about her amazing (and it really is amazing) "whatever day" cake she always makes, but there was none to be had. I told her we'd come back up sometime to have it because she was sad she hadn't made one when he had looked forward to it. 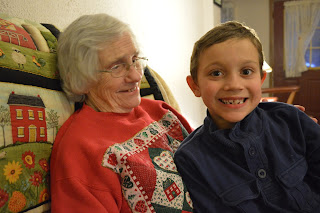 When we left, My mom and sister stopped in. Peep insisted they wait while she put a cake together for Jack to have for Christmas. 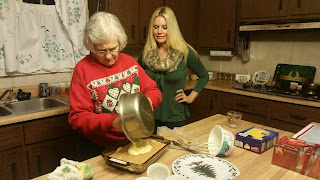 We had no idea, and Jack was thrilled when my mom arrived with it. I was thrilled to have that old glass pan so many of these "whatever day" cakes have been made in. I know that pan. I know that label, and I probably will never return it. . .
That is a memory right there of so much more than a pudding and graham cracker cake. So much more than a cake. 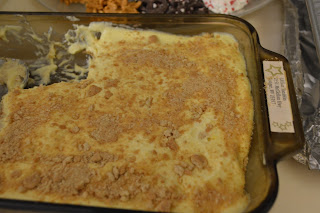