A year the majority of people are glad to see over and done, at least from where I sit glossing over my newsfeed.

It seems a rotten run of one disaster into another disaster for many folks.

For me, the end of this year brought within a breath's reach the finish of ten full years I've lived without my sister and two younger brothers.

A decade passes on the 13th of January. When it comes and goes, I'm done.

I've thought a lot about how slow and fast this time has gone. How that works, I don't know. How can it seem like I've not laid my eyes on them ever before and then that they were lost only yesterday?

But after ten years comes to a close, I have decided to let this go. To some who only know me after their loss, you may believe I've accomplished a lot of good, kept it together and been really inspirational, but what I know is I've allowed a lot to become lost in this nightmare, and those who knew me before are very aware. I'm not really sure the positive changes in me could ever outweigh the negatives.

So I have to let it go. The grief I swore I would never stop holding onto desperately. . .

There is a thing people who suffer catastrophic loss often either do not realize or will not share. It is in the holding on to the brokenness that we initially survive. But after a bit, it becomes so familiar and connected to those we miss, we don't really want to let it go. I know for many years, I did not.

To ever decide to let it go, for me, means to really close a book on those I have been tightly clinging onto. I used to think I could keep remembering and remembering and be ok. And it served a very real purpose then. But after ten full years, I have found I thought so much about their absence, I have forgotten their lives.

I remember their death. I don't remember them living. And they were so vibrant and alive. I think of the apartment in a blaze and being numb and walking around in front of the building dragging my little boy behind who was frozen in the January rain for hours, how their skin looked and felt like clay when I was finally able to see and touch them.

How can I be ok dragging those memories around?

I don't remember their laughter, what it felt like to hug them or how it was to talk to them at all, anymore. Their lives have been replaced by their deaths.

I forget how they sounded when they were mad at me. I forget what having them in LIFE was like at all.

Ten years of remembering death has wrecked me. And it has given those who love me a shell of a person holding onto gruesome memories day in and out.

How I wish I could have spent these last ten years remembering them the way I do my daddy. But that was never my way. While I miss him, when I think of him, I think of him as he was. I almost never think of when he left. But when people are taken from us in an unexpected, brutal way, it works so differently.

Frankly, had you told me 9 years ago or one year ago, I would come to a point I wanted to let this go, I would have been enraged at the suggestion.

I would have been angry, at my worst. I would have felt guilt, at my most honest. How dare one tell me I should let this go. They are mine, and I lost them. I would have said I'll be this way forever. But forever is crushing me.

I haven't spent ten years celebrating their lives. I've spent it grieving myself to death. So close to being unable to carry it, I dare not really say.

It has made me more cynical and pessimistic than my nature ever was, and honestly, being able to blame what I lost has occasionally been a handy crutch, too. How did I let their loss become an excuse? That is shameful.

Choices. We make them, and the lack of a choice is A choice, whether we admit it or not. I chose to give that grief a solid decade. That beautiful sister and those awesome brothers of mine would never have wanted me to spent ten years remember they died. They would have appreciated remembering they lived, though. Remembering they are gone is about me. Remembering they were amazing is above them.

I finally feel like closing that door is a possibility.

So in 2017, I'll let that go, and I will remember they lived and forget the rest. I've carried it as long as I can. 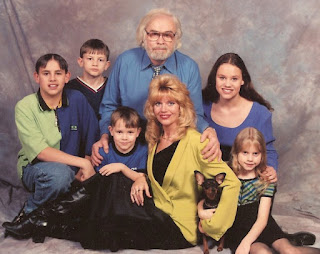