Posted by Tinia on February 24, 2017
I've spent my entire life answering for myself. For my care. For being unorthodox.For trying to be just "me."

As a little girl, I remember being made to feel less, made to feel uncaring, confused and wrong. . . because I worried about animals.

My first word, the first of my life, as the story goes, was "Horsie."

I didn't have a horse. My, my. . . how they were on my mind even then before I was even two years old.

I remember being very small and crying in the backseat because another litter of puppies covered in mange was left on the roadside, as I begged for someone the help them.

I know, back then, it was everywhere in rural Appalachia, and there was no way to help them all. There still isn't. My parents did let me try to help. But I was too young to know how. I made many mistakes in my efforts to help animals as a child.

There was no social media. No advocacy. No humane presence. No understanding of altering these animals. No way to find safe homes. So many showing up at the doorstep over and over, though.

My daddy was a man full of compassion for animals, he really was.
He had to hunt to avoid starvation as a little boy. To help his mother with 12 children because the land wasn't really hospitable to agriculture. He told me he had to kill too much to ever believe hunting for sport was decent by the time I was born. He did not, for a moment, ever act in a cruel way to an dog, cat, chicken or livestock, in as much as he understood. . . being a man born in 1923 in the poorest region of the United States.

Years went on. I grew, and I was always made to believe my compassion for animals meant I didn't care for people. I couldn't understand this, as a child. I had to wonder, "Is something wrong? What is messed up within me?" I didn't feel like I discarded humans in favor of animals, but adults told me I did over and over. I had to wonder. It seemed to me that people discarded everything for themselves, both man and beast. It seemed I was trying to be a voice for the voiceless. It seemed to me, as I aged, what they said to me reflected more on their lack of action, but so many insisted the problem was within me.

I remember when I became a vegetarian at 14, people laughed and were so cruel. It didn't change my course, though. I imagine no one is shocked at that. I suppose in my county, no one had heard of such a thing before (maybe since). I recall my beloved Daddy's disappointment until his death that I would do something like this. It was simply too fringe.

I grew up, as one will do. I'd like to say none of this mattered. But it did. I tried to tell myself centering a life on animal welfare was wrong because everyone told me it was: that my desire to help animals was a life being wasted that could be spent helping people. Everyone who came into my path told me so, after all. Did they not know better than I could?

Be a daughter. A sister. A granddaughter. A wife. A student. A worker. A mother. A writer. A "typical" Christian. An advocate for anything but animals. Be anything at all but who you are because who you are fails. It isn't good. It is a failure.

"They are just animals."

"God doesn't care about them much. The passage in Proverbs that St. Francis so often noted which equated Righteousness with kindness to animals was only a joke, honey."

I will not lie. There are times, It has gotten to me while alone and I have wondered. . ."am I wasting life I could have used for people?"

Beings are beings: Innocent and deserving of kindness. And people are connected to animals in such a way, never is an animal's life touched that humans, in so many ways, aren't shaken to the core, changed, helped, made stable. ..that they do not have faith in humanity restored.

I'm past feeling wrong most days. Feeling as if I've pursued the wrong course.

This course was laid out for me from the time I was born. From the time my daddy who made it through the Great Depression and my mother . . .made me. . .it is me. Was and Is.

The people who have and still tell me I pursue things amiss are wandering without a purpose. That is their failure. It is not mine. They are who are lost, without purpose.

Perhaps they envy the ability to know and run into your purpose for being on Earth.

It took 3 decades and then some to be prettty sure of it. . .I am not the confused party.

Those things are never there by chance, happenstance or error, folks. That is the person you were born to be, and By God, please never lose sight of THAT person. Too many have and will. 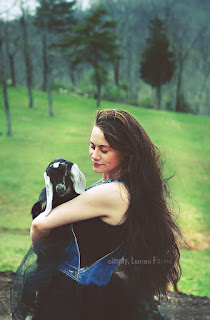