Fact is, she is the quintessential, renegade woman of an era long since past where women were seen and never heard

I had long been sure I loved my Daddy more than everyone else. No one loved him more. I've felt sure of this for years.
How could they?
I mean, yes, he had a plethora of children. Sands of the ocean and whatnot.
They mostly seemed to love him from the depths then to the widths of the Earth and back, sure enough. As they should.
But I loved him more, I'd thought. 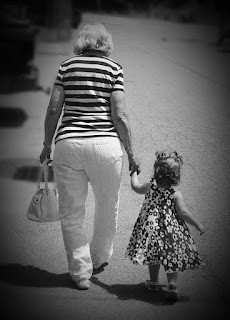 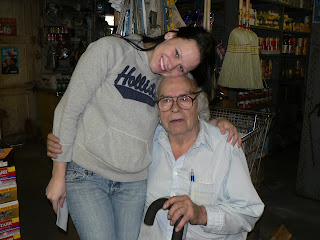 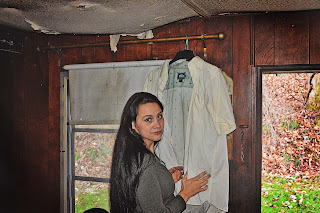 Then tonight, I saw this photo of his sister walking with her great grand-daughter.
And you might wonder, how does that connect. Lord knows.
I don't know know why it made me think more than usual about anything. Fact is, Peep and I both love to be in a photograph and to take one, as well, and I've seen many of her. More than you'd expect of a woman born during the Great Depression in Appalachia. Perhaps it is the hour of my post combined with this image showing a more tender side than she would usually pose for, or maybe it was just the right time to mull it over.
My aunt Peep is close to 90. How close? Perhaps she will be 90 this year, and I really should know for sure, but I do not.
She has never failed to be part of my life. Yet it was not in the way that did her justice. She was always there, though.
She was always there by Daddy's side. Or in front of him. Or behind him. It depended on various things.
Long, long before I came along, she was there with him. Almost six decades before I arrived, and honestly, she was there when I wasn't because I was growing up, trying to figure out life while forgetting the things that would only matter enough once it was too late.
I have to wonder did she ever forget the things that mattered like I did? I suspect she did not, though.
Every memory I have as a child has Peep working with my Daddy in his little store on Route 10 in Lincoln County, West Virginia.
And she knew everything about that business. A business that amassed millions of dollars collected and may have let as much go unpaid, too.
The floor in that little century old place was concrete and 50 years may have passed while she walked around there every single day, except Sunday. And her legs told that tale well.
I recall her skin from ankle to knee, at least, being nothing but a sheet of deep blue from the veins that had ruptured en masse all over from all those years in his store.
Fact is, she is the quintessential, renegade woman of an era long since past where women were seen and never heard. She never has been wildly emotional, sensitive or worried about what others might think. She wanted to be and was always funny and charming in Daddy's store. Memorable. Frank. Sensible and dedicated and able to speak her mind in a way I cannot recall of a woman coming from her era doing in all my life.
And she worked by Daddy year after year for little in return, and when his time was so small, her house, not mine, is where he went.
And she, not me, took care of him.
It was never because I would have refused to take care of him because no great honor could I have known in my life, but it was not what he asked. And I wouldn't have suggested what I knew he didn't want.
Besides that and more than that: Daddy only did whatever he wanted, anyway.
She has often talked of him coming there before he died, and while the words are different when she speaks them, it is understood she held it her duty and something of an honor to care for her brother. This man of some mystery and sadness and oddness and Majesty.
And just as she had taught him, her older brother, to read, many years before, and just as she had defended him through multiple wives and children, and just as she worked in the cold and heat on the concrete with him, she cared for him until the end.
So when it is all said and done, I am reminded, it isn't so much that I am like my daddy, though I've said it my entire life. It seems it is that I am, I suspect, more like my aunt Peep.
And I pause to wonder why I am nearly 35 and only seeing it now.
It isn't that I loved him best at all, but that I loved him in the way his sister had, in that big, dedicated way that love should always be offered. . .without asking for anything in return.
I reckon I need to make a trip, if I can stop pursuing many other things long enough, back down Rt 10 to tell her.