Posted by Tinia on September 20, 2017
An old picture tells so many things.
At a glance, nothing much. . .
then again, if one ponders, and I ponder a lot because that is my lot in life. . .all sorts of tales are right there. . .
things I knew nothing of before. . .
Do you know what it is like to see a photo of your long since grown and gone father thirty or more years before your time? Lord, 60 years ago at this point, maybe.
Long before even my mother was born. . .with his first children.
Children.
My paternal siblings.
My brothers. My Sisters. A grandmother dead a full 20 or more years before I came to be.
Full, the image is, of people who would wish I'd never been. . .people who would never understand why my father decided more progeny made sense. . .
Heck, I don't even understand why he thought it made sense, so one cannot blame them, really.
These brothers and sisters would, by and large, never feel differently regardless of what I'd do. . .this was a value measured based on circumstances I could not control . . .
My life is a scramble of things.
As much as I am glad for the weirdness of it, being born to a Daddy who was about sixty with ten children or so already long since grown makes for sad times, friends.
Being born to a daddy who was already ready to go on makes for sad times, too.
I knew he would be gone before I was able to understand it. I am 35 and have been missing him for a very long time now. Missing him not because of some disorder, disease or accident. . .missing him simply because he was lived out and left me too soon. . . and too late to suite him, really.
It has been an odd thing to have a genetic chain of so many siblings and end up with almost none at all. Time and chance means out of far over a dozen, I've been left with few.
I knew my mother would go on to find someone else when I was still fairly young, and a father would be a thing I would only imagine for most all of my adult life.
I knew I would always be on the outside. And more than I realized, it has been. Always missing things. Always wondering.
I've wondered my whole life.
What. . .
Like. . .what was he like? That man that I knew with huge, white hair who didn't believe in laughing. . .who told me I didn't use enough salt on my food, who told me to study to be quiet, who said I had a good personality but didn't have blonde hair. . .who said I never said anything he didn't want to hear. . .
What was he like when he was a young man? Was he happy once? Did he laugh? How was he to his first children? Did he play with them? Did he want them, do you suppose?
Did he love them? What, if anything, did he like? Did he dream of things, do you suppose?
Did he want me or did only my mother wish for me? What about all that came after me?
If he would have be inclined to talk about anything but the Lord, what would he have said about himself?
I can't image seeing his face without age or seeing his hair black or him smiling.
Smiling. I've seen that in pictures.
Sometimes. Not often, of course.
What a bizarre thing that would have been.
Really, what a sight it must have been.
He was a beautiful man, I believe. He had to be. Before photoshop and crossfit, you know? I know it from photos. . .slim with a lovely jawline and black eyes with much like my younger brother. Strong. I suppose I see it in me, don't I. But I have blue eyes, and he didn't did approve of that.
I run across images captured during bits of time, so I can piece together some tales about him. That is what I get now. Heck, it is all I've had.
My daddy is there in those moments, and he is married to a first wife and young. He smiles and has little kids around him and expectation. . . he clearly has expectations. . . and he seems happy. Happier than I ever knew. I never saw that. He was broken and lost and sad and closed up when I knew him.
He seems content and seems a man waiting and someone I never knew in those old photos, and I miss something I never met.
He has been gone a long time from me because he was old and tired and didn't want to go on, and I see photos like these and wonder what that man must have been like sixty years ago. . .
What a thing. . . to miss something that you actually never met at all, what a thing when you can only guess on based on old photos of times long since past about a being you've loved so well. . . 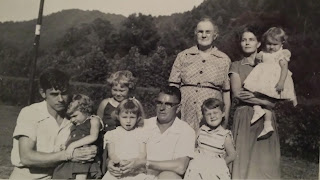