This hat and memories and things. . .

Posted by Tinia on November 27, 2017
This hat has a lot of history.
My sister and I received matching ones from Pac Sun in 2006 on Christmas.
Mine was from my brother, Ben. It was the first and last gift he ever gave me.
She got one, as well, but I sit here unable to remember who gave it to her. Maybe she bought it because she loved it and knew Ben had bought one for me. I just can't recall, and time takes details away from us.
Or maybe this is my hat. Time has taken away the smell of smoke, so I can't tell which is which when I pull them both out, and I wish I'd thought to write initials on the tags, but I probably wouldn't have wanted to change them. And let us be honest here, I never thought the smell of smoke would abate, did I?
The things I do remember. . .
The last photo Angel ever took was in this hat.
The most cherished thing pulled from the apartment entirely intact that I have of her's is this hat, which generally rests in my clothes on top of a little box with notes she had written and the matching one from Ben. . .
Things only matter when memories and people are attached to them, in case you ever wondered. 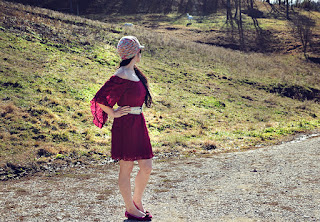