People ARE willing to follow a good example far more often than ignore it.

Posted by Tinia on December 21, 2018
Wherever you live, odds are, if you're on the road half as much as I am, you will find folks standing on corners of roadways and business centers asking for money for food.
We wonder. . ."is it food they are really looking for?" I know we do.
Sure, we know sometimes the story is a ruse, and sometimes the person out there has a great "business" going with a hard luck story they made up.
Sometimes.
Then again, sometimes they are veteran of a war they didn't create with mental illness they never received help for, too.
and sometimes she was molested by a family member, and perhaps it turned into rape where she ended up pregnant. Maybe she then ran away and found the only way to make it was selling herself, and that became her normal.
We don't know, because we rarely ask.
We assume. We assume because that is what we too everyone else do.
And we don't assume on the side of compassion too often. We aren't seeing enough of that.
There are always stories, aren't there?
We all have them, don't we? We care so much about our own "hard luck" tale, what time do we have to worry about others' pasts?
Oh, we could have the time, though.
What I know is when you're standing on a corner in cold weather by a busy intersection in a torrential downpour, we usually drive on by, yet some compelling reason beyond a "quick buck" is driving that person to stand there with a sign.
Some story worth caring about is probably right there without anyone to hear it.
Yesterday I was turning to head to the rescue farm. . . you know, where we fix broken horses - offer a second chance - love them. . .get pats on the back for "saving horses" and so forth. . .
And an old man was standing in weather no one without a shattered past was likely to stand in. . with a limp I don't think he exaggerated entirely.
I was so far back that I didn't think, even though I felt compelled, I could safely give him anything, as I was a red light at such a busy crossing with rush hour (if we have that here) traffic behind me. I probably wasn't inclined to an example of kindness at that moment and risk holding all the others in their dry, warm cars up. . .
Then the most amazing thing happened. . .
The first car rolled the window down and gave him something, then the light turned green.
The second car slowed down enough to do the same as she pulled on out. . . instead of driving on through quickly.
And the next and the next, and it made it all the way back to me, then cars behind, so that as I drove slowly by, I was able to give him a protein bar and a dollar.
I mean, It was what I had with me.
I don't know how many behind me did the same, but only one or two cars in front of me failed to follow the example set by the first car.
And no one honked and yelled we were holding everyone up, and it was done safely.
And it was like Christmas happened that day.
I know it is supposed to be this coming Tuesday, but I am rather sure nothing will happen that better speaks to peace and kindness and love for all kind. . .than that moment at about 3:30 yesterday afternoon.
More than that, I thought of The Domino Effect. 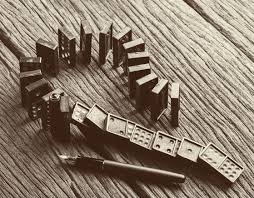 People ARE willing to follow a good example far more often than ignore it.
So think about that, friends.
Your actions absolutely impact the world.