Persisting in Appalachia: Opposition and Opportunities: Part ONE


Persisting in Appalachia: Opposition and Opportunities

Born in 1982 during an April snow, I was. My Daddy, a self-made millionaire from World War II who made his shoes last longer through the sensible use of duct tape was nearly 60 years old by then. He has lived in a dilapidated trailer off the side of a county road known as “10” for some years before my arrival. He would live there for many after. My mother, barely out of her teens, persisted there with him, for a season, but not forever.

Five children came after me, the last born when Daddy was eighty. The upbringing was sparse and full, all at once. As a sister, I found some way to be mother, even though my nature isn’t motherly at all. I found a way to be a friend, even though I always wanted center stage. I ended up a tyrant, and that part I’ve tried to correct all this time later. The unique life we led through and with the unusual people who raised us was something we embraced and enjoyed and spurned.

But this is a story at odds from the start, isn’t it?

My father was a man married 6 times with children far older than my mother. He was a man of the Great Depression with a head of untamed white hair kept too long (though we would dare say that to him), large glasses and decided views on the use of salt and jokes. He frowned on my wants and big personality, and still he was all but God come to Earth in my view. My mother was a woman you cannot un-see once you’ve laid eyes on her, and she stayed up all night watching me perform plays and allowed me to push my way onto trips she took to anywhere, just because I said so, but somehow that didn’t construct the obsession my father did within me for a person. She was taller and blonder than average, eyes bluer than everyone else’s, bones and spaces all elegant and symmetrical and perfection. She had dreams too big to ever come true in my mind, and she had a husband telling her, at least once a day, “Eyes not satisfied with seeing, ears not satisfied with hearing.”

I believed him first. He was not one for dreaming, you see. I didn't want to be, either.

To be heard, to be seen between these two enormous personalities was never easy. I tried.  Somehow, I did it. A Kentucky Colonel, hard-shell Baptist, former underground miner, a man with thousands of small bill booklets left unpaid in his store because local people were in poverty, as he would see no one go hungry. How oddly paired, he was, to a small town beauty queen with a love of making spaces baroque and odd, always on a quest to spread Jesus and a life story across a nation. They both blazed trails and carved out lives of interest and value in directions that bore no similarities to one another . . .some could say in spite of, though I wonder if not because of lives in a rather isolated area of Appalachia. 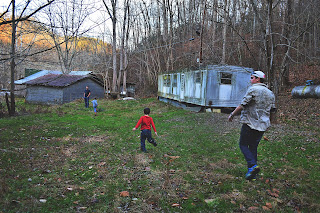