Our past matters: All of It

Posted by Tinia on November 11, 2019
When I had just barely turned 16, I married a boy I'd gone to school with since I was 13.
21 years ago, almost 22. . .
No one could tell me anything. Less then than now, so that may explain how desperate a fight my mother had with me at the time.
I don't remember the day, but it was May and it had to be 1998. We were in Virginia, I know that.
Wait, I am already making this story about me.
I tend toward that, I guess.
I found out this evening that someone I had known since I was 13, someone I ultimately married for a short while, was murdered. It happened months ago.
They only just now found his body in Tennessee.
It is a long story, and it doesn't have many happy moments, and certainly, the end is worse than unhappy.
A lot of folks don't know about that first marriage, on my end.
Why? It was embarrassing, as years went on, to me. I left it out, and I did so with intention.
What a mistake it was. In most ways, but I don't think all. As through our marriage, he met my entire family, and some of them kept a very close and helpful contact with him through the rest of his tragic life.
Back when I knew him, I was a kid, in one way, but truly, not really.
And maybe it takes folks dying to realize we leave people behind too often and never think of them much again, and maybe we should. It isn't that we shouldn't have moved on, but human beings . . that were part of our lives at a time. . .maybe we should think on them, close open ends, say something kind. Not always, but many times.
He was a just another kid, and honestly, he was that, and while we had no future, we spent years together. And when I was done, I was. . . and that was essentially the end. But you can't just pretend a person wasn't there, and I am reminded of this now. I did pretend he wasn't ever there.
And while I knew him . . .West Virginia was on the cusp of the opioid crisis and he went down that road, he was harmless, meek and looking for something better - and it seems he never found it and was never able to get out of the mess that has all but drowned this state, this region.
And it isn't a story I would have told without tragedy, as when he tagged me in this photo with a little quip in 2013, I untagged myself. . .
But no matter, It was a story, a segment and part of my life, and we can't pick and choose, in hindsight. What happened did, and people matter - bad, good, harmless and all the others.
It all matters,
Lives matter.
For a short while, he and I lived with with my friend, Judy, in North Carolina. in 1998. It seems, in the end, addiction played a role in both of their lives ending far too soon.
I am sorry that Mason could never see his life did matter. I am sad that a person who never intended to be unkind to anyone found little hope in his life. I wish he had. . .
I've done many things I regret, but I'd do this again to allow this harmless soul to know my family, who loved him, and did so until the end. 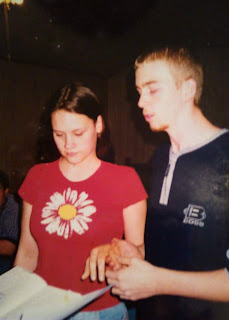